Today was our first day in Phuket!

We arrived at about 11 to Karon after being in airports and on planes since 8am that morning so it was fair to say we were quite tired. After being checked in and shown to our room, we looked around at the beauty of it and decided it was probably best we go to sleep! Daniel was nice enough to book us some surprise accommodation from a scoupon so the accommodation is far more classy than I think we will ever see again on this trip and needless to say, when looking around, I felt very lucky to have such a sweet boyfriend 🙂

We woke up, after promising ourselves a sleep in, at 7.45 and attempted to go back to sleep. After failing at this we got up and went downstairs for a beautiful free breakfast which consisted of fresh fruit, freshly made omlettes, toast, fruit salad, dried fruit and boiled eggs. Daniel also had a hand at the fried rice and bacon but I was a little more reluctant. There were heaps of other options including cereals, sandwiches, French toast, Danishes and muffins. Yum!

After this we went up to our hotel and got ready for the day. We went out and explored Karon city a little bit and we were impressed by this cute little town. We strolled through a market, walked down the streets and then decided it was time for a relaxing rest of the day by the pool. 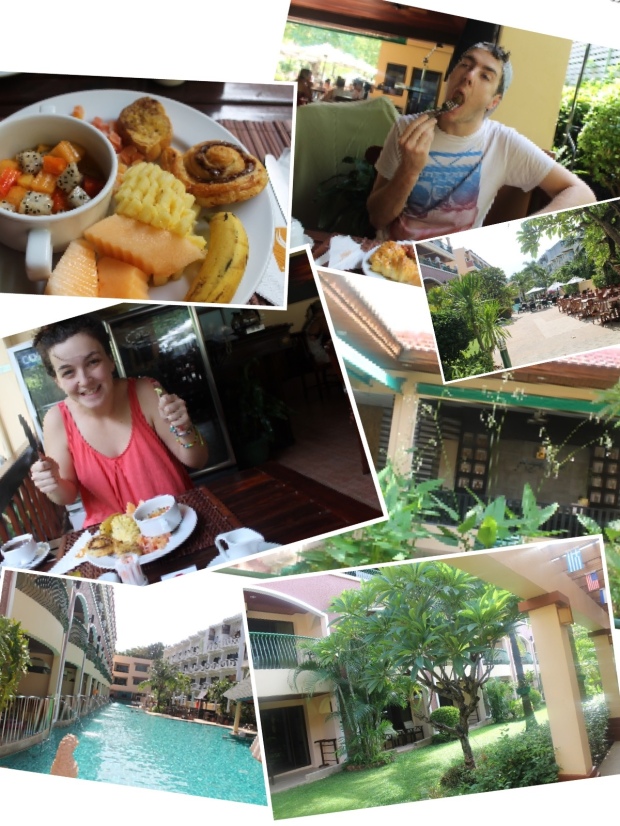 After splashing around for a few hours, playing silly wrestling games and laughing at a topless girl it was time to go upstairs and shower before going out for the evening for dinner and some drinks.

Dinner was at a cute little street restaurant, tucked away in a little alley. Daniel had fried rice and I had some Pad Thai and we also had a Thai beer with dinner. The total of the bill came to 220 baht which was a little under 8 dollars and the first money we had spent all day. We then walked around the town and had a look at all the bars and restaurants. Another beer was consumed at a little bar down an alley way which in total nearly cost more than dinner. A few games of foozeball, where I lost miserably, and a few of pool, where the only way I won twice was due to Daniel sinking the 8 ball before it was due, were played and after this we walked around again for a while.

Walking around in the city was nice and the lightening we witnessed as we walked around was very exciting but after a while, we both admitted that we were terribly tired and drained of energy so decided wisely to head back home and have an earliesh night.

Indeed, a very exciting and nice beginning to an awesome holiday! 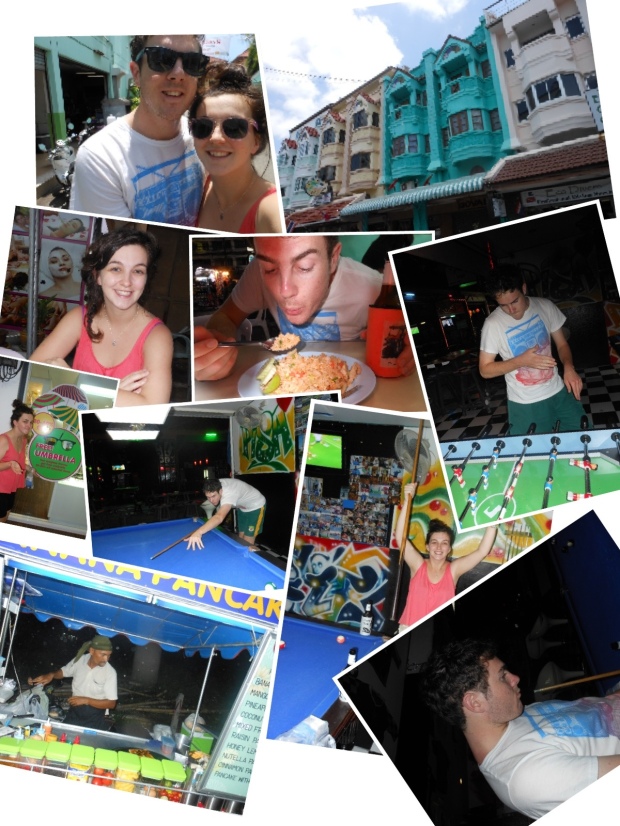